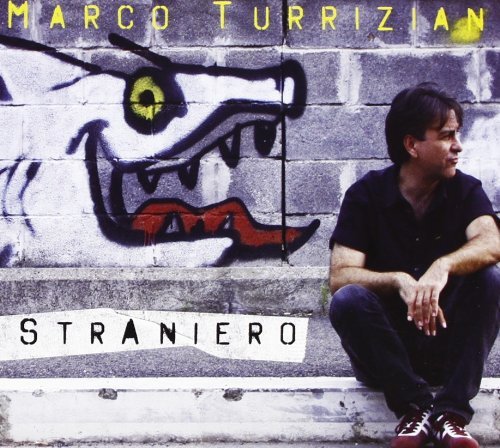 Author, songwriter Marco Turriziani has a solid academic background that completes and embellishes a spontaneous and early approach to music. His artistic career ranges in fact in genres and experiences revealing a strong eclecticism both as a composer and as a musician. Graduated in double bass at the Conservatory, he began to collaborate with various orchestral and chamber ensembles; in the same years he performed with the formation “Milk and its derivatives” where he expressed himself with a decidedly rock sound. With Lillo & Greg he participates in various TV programs: the first edition of “Le Iene”, “Generation X”. The new album by Marco Turriziani is called STRANIERO. A return as an author, six years after his first solo work, in to which the former Latte e i suoi Derivati offers us with a refined originality its own view of the world: Twelve tracks with bright colors that do not lack the pastel nuances of poetic and imaginative tales.The Roman artist scratches and caresses with words and notes alternating with irony and irreverence, always his very personal figure: from the intellectual screwed into distant thoughts of Lightness, to the corrupt politician of Bugiardo, a call without rhetoric to those who sent the country in disarray. L’aspirante angelo, becoming himself a foreigner like one of the exiles whose boats are overflowing in search of shelter in Lampedusa. Satire of an Italy that presents the account of the great splendours “, reason that also returns in a verse of Il paese che non c’è The palette of its colors becomes therefore acidulous in Io odio tutti! and Yuri. Hymns, disenchanted by the strong tones and clear lines that underline the harshness of life and the crudeness of survival in the need to resist. It is necessary that it becomes a dreamlike escape from the cubicle of the walls of a prison cell, in Sogno la mia bella. The notes then lead us back to the roots of the musician, rock, which with a brushstroke of acrylic in My toys, reveals a lyrical and introspective soul. Then, as in a sequence plan, let the similarities of Passo lento flow into a bubble of silence among the noises of the world. It breaks the tension with a certain psychedelic taste the new single Vai, in which it incites to accelerate “to lose sight of at least the troubles”. Finally, the journey of a poor Christ closes the circle of this journey from Stranger in his land. The final dance of Un valzer da quaggiù, three-quarter steps of a revived Jesus, really makes us hope that everything changes. The album, testifies to the enormous possibilities of artistic synthesis, the extremely lucid sound situations, the coherent unraveling of the musical plot that does not want to resort to worn-out solutions, on the contrary, instead, the melodies intertwine in various experimental paths but never excessive. It is once again an album “played”, albeit minimalist. We no longer find the orchestral band accompaniments that appeared in the first album, yet we can see that choral atmosphere of good records made of music and musicians. The six years that separate him from Bastava che ci capissimo io e i miei. A long pause in which the Roman singer-songwriter has carried out other projects as an author: lots of live music and lots of theater. The songs, which flow with good rhythm, make one dream of indigestion of happiness for those who let themselves go by listening to them.